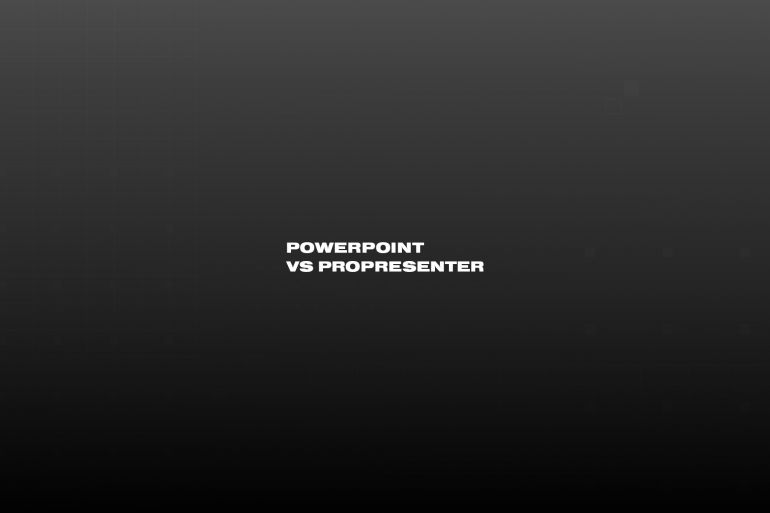 If you’re weighing the pros and cons of various presentation tools, there’s no getting around PowerPoint. Because it’s a part of Microsoft 365, the most widely used office suite in the world, PowerPoint is everywhere. It’s familiar too, since most people had to use it to give presentations in school or in the workplace.

But is PowerPoint really the best option for your needs? If you’re doing more than basic conference room presentations, the answer is likely “no.”

Below, we’ll compare PowerPoint vs ProPresenter, showing you where each program excels — along with the significant limits of PowerPoint as a pro-grade presentation tool.

Both applications are cross-platform, supporting both Mac and Windows users, though historically the Mac version of PowerPoint has been less developed than on PC.

Support for PowerPoint is complicated. The level of support you’ll enjoy depends on the type of Microsoft 365 license you hold. Fortunately, even with lower/no support, there’s plenty of documentation and troubleshooting help available online. PowerPoint is ubiquitous, which leads to lots of extra resources and support.

ProPresenter, on the other hand, offers premium support to all customers. You’ll get access to Real-time chat, email, and scheduled phone and video calls.

ProPresenter offers a completely free and unrestricted trial of the full software solution. You can use it for 14 days, after that it will have a watermark but remain fully functional indefinitely.

Office 365, including PowerPoint, has a free 30-day trial that requires a credit card. Afterwards it will eventually run in View Only mode.

Slide capabilities are one of the most important attributes for presentation software solutions. This is true for houses of worship, educational institutions, and businesses of all types. It doesn’t much matter what else an application can do if it doesn’t allow you to create slides full of compelling, attractive content with ease and speed.

You’ve likely seen PowerPoint presentations that look great, and you’ve seen ones that look terrible. So the software can allow you to create professional content. It’s just that the editing suite is limited, so doing so isn’t simple or straightforward.

Both PowerPoint and ProPresenter allow you to display slides with text, graphics and video, but if you’re looking for an advanced suite of professional editing tools, PowerPoint starts to fall behind. Powerpoint does let you work with shapes, gradients, opacity, shadows, styles, templates and themes, and it has support for slide transitions.

But check out this long list of slide-related features in ProPresenter that PowerPoint can’t match:

ProPresenter offers users app control, the ability to control presentations from anywhere using dedicated apps for iOS and Android. PowerPoint doesn’t offer anything along these lines. Both presentation apps supports remote control via a USB clicker as well.

Live editing is another powerful feature ProPresenter offers that PowerPoint doesn’t. If you’ve ever been running a presentation and noticed a problem with an upcoming slide, you’ll appreciate the value here.

Using a tool like PowerPoint, you’re pretty much stuck once the show starts. Your only options for editing a show once it’s running involve freezing or muting screens, exiting the show, and trying to get a fix in place before the presenter is ready for the next slide.

ProPresenter is different. You won’t find separate edit and present modes here, which means live editing is a reality. Make whatever adjustments you need at any time — without disrupting the current slide or the speaker’s control.

In worship contexts, this means you can add or delete choruses, rearrange verses and more, on the fly.

If you’re looking specifically for worship presentation software, you’re going to be working with a lot of lyrics. Only ProPresenter includes integration with two top worship music databases, SongSelect and CCLI. These integrations will save you tons of time and prevent embarrassing typos from creeping in due to manually retyping every song lyric.

PowerPoint was built for the office, not the sanctuary, so you won’t find these integrations or copyright support.

Even if you’re operating in a pro broadcast environment using formats like SDI, NDI and Syphon, ProPresenter can handle and transmit over those protocols, as well as tangential protocols like RossTalk, DMX, MIDI, Sony BMV, GVG100 and others. ProPresenter can work with professional video outputs. PowerPoint can’t.

Churches’ display needs are growing more and more complex, with many relying on live video and video switchers for live streaming or even internal feeds around a church. ProPresenter includes support for live video and camera inputs, allowing you to run your entire stream through your worship presentation software.

PowerPoint offers a presenter view, which allows a second display to show a reduced slide, slide notes, and a preview of what’s coming next. It’s a great way to control the presentation in a conference room or boardroom, but that’s really all the presentation tool was designed for. If you’re looking for anything more complex than that, you’ll need to move on to another software solution.

ProPresenter offers you up to 8 outputs or alternate views. You can use confidence monitors (stage displays) for your onstage personnel, and producer or studio views for other individuals in your production. You can create a lobby feed that’s different than your main presentation feed, plus a different set of rotating content for announcement kiosks.

And because of ProPresenter’s unique approach to how you create presentations, all these content streams run from the same central presentation file. You can make changes that sync across all views, even in real-time while the show is displaying.

On a schedule? ProPresenter lets you set multiple timers and countdowns and even color-code them. Send specific timers or countdowns to specific feeds so that your speaker or presenter, worship leader, tech team, or anyone else knows how long they’ve been going or how soon they need to wrap up.

PowerPoint offers one general timer on its presenter screen, but it’s inflexible. All it can do is tell the person with that screen how long he or she has been presenting.

Being able to pull in Scripture passages quickly and powerfully is an essential component of church presentation software, but it’s not even a consideration for office-oriented tools like PowerPoint or cloud-based Google Slides.

ProPresenter supports 125 unique Bible translations spread across 36 languages. Simply select your passage and version, and the content auto-populates in the feature-rich slide editor.

Additionally, ProPresenter builds in the ability to automatically display multiple Bible translations (such as English and Spanish side by side).

PowerPoint and other office presentation apps aren’t built with church use in mind, so there’s no direct support for any Bible translations. You’ll be copying and pasting and manually formatting every single Scripture passage, which adds up to significant amounts of time over the long haul.

Final Thoughts on PowerPoint vs ProPresenter

As we’ve compared the two tools, PowerPoint has a wider adoption, broader native language support, and a more robust support base. But in nearly every other way, ProPresenter outpaces PowerPoint as a pro-grade presentation solution. And if you’re reading this article, you’ve already used PowerPoint, seen it’s limits, and are looking for something better.

Curious how ProPresenter stacks up against the rest of the competition? We’ve recently completed a series of comparison guides so you can see exactly how ProPresenter compares to other popular presentation software solutions. 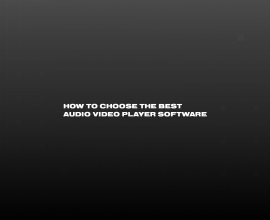 How to Choose The Best Audio Video Player Software 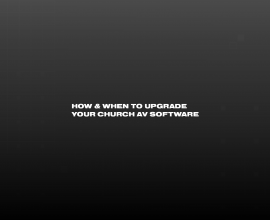 How & When to Upgrade Your Church AV Software 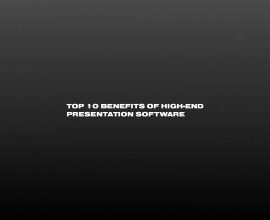 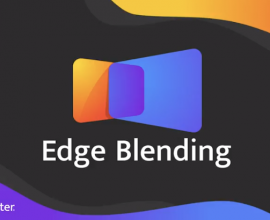