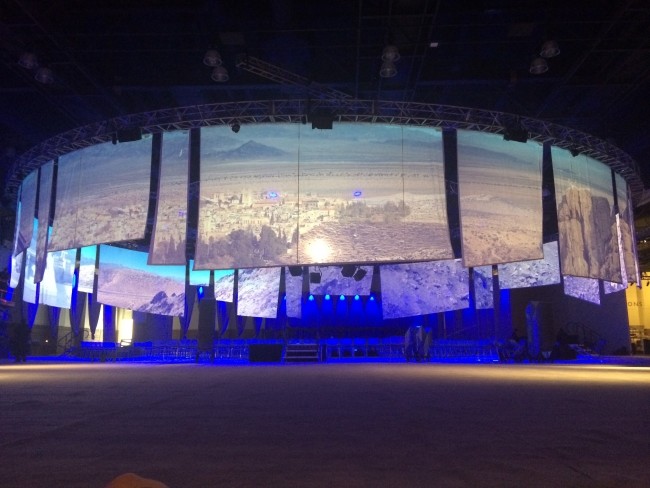 Every June, The Salvation Army rallies it’s troops from the 13 western United States at an event held at the Pasadena Convention Center in California. Ostensibly, this is to mark the ordination or “commissioning” of new Salvation Army officers (pastors), but it’s also an opportunity to share in fellowship and creative corporate worship. For years we’ve been wanting to do something in the round, but the opportunity (and the technology) has always been just a little out of our reach. But this year we decided to go for it, as our director was wanting an immersive worship experience, centering around Jesus’ journey to the cross, and the people he may have met along the way.

As such, we decided to begin by flying a circular truss. The outer piece was 100′ in diameter, and over 300′ in circumference. There were also two smaller circular trusses inside of that, one for lighting and the smallest in the middle had audio support and twelve 18k projectors. Initially we were going to do a single piece of muslin wrapped around the outer truss to encircle the audience with projection. Video playback was going to happen with a Spyder system and operator, which we’d have to rent. However, once we saw the capabilities of PVP2, our thinking about setup changed dramatically. Because the content of the meeting was going to be drama, song and dance, all set during Jesus’ life, I felt a giant cyclorama would be too overbearing and modern. Instead, we decided to create muslin panels of varying size and shape, and hang them somewhat haphazardly around the outer truss, which we were able to confidently do with the knowledge that PVP2 would make masking the video projected to those pieces fast and easy.

Around this same time, we discovered the power of the new MacPro. In discussions with RenewedVision, we quickly realized we would be able to accomplish our entire setup using a single MacPro and a single license of PVP2. We quickly moved in this direction. By adding a single TripleHead2Go to the three we already owned, we were able to use four of the MacPro’s six Thunderbolt ports to send video signal to our twelve different projectors, and a fifth Thunderbolt port for a control monitor. We had 25 unique pieces of muslin created and hung within our overall projectable space, with the seams between the projectors falling in the gaps left between the muslin panels, making edge blending unnecessary. The largest of these pieces was 25′ wide and 15′ tall, of which there were three to be able to carry more “featured” videos. Once everything was hung and the projectors focused in, PVP2’s masking tool was even easier and more precise than I had hoped, and I was dialed in in a matter of minutes, not hours. Further, I was able to very easily network my MacBookPro running ProPresenter to bring lyrics in to the text layer, as well as add additional layers for playback just to the larger pieces of muslin for “featured” videos.

The overall effect was incredibly stunning, and totally captured the immersive experience my director was wanting. PVP2 performed incredibly well during the show, and I have no doubt this event will be talked about in The Salvation Army for years to come.