Seven screen staging project utilizing a single Mac Pro. The two big outboard screens were our landscape IMAG screens and were fed by video switcher. The 5 inside portrait screens were 4 13.5′ x 24′ rear projection screens and a center LED wall that measured 16′ x 25′ and was on tracks that moved it forward and backward.

Used a 2014 Mac Pro (8 Core with 32GB RAM, 1TB of Flash Storage, Upgraded D7000 Graphics Cards). Outputs were a 1080 signal for my user monitor, a 1080 signal for video playback to the switcher, and three 1280×720 signals from a TripleHead2Go along with 2 more 1080 outputs. 5 Thunderbolt outputs were used for video and one was for video input from the camera switcher via a Blackmagic UltraStudio 3D (which I was pleasantly surprised to find had roughly 2 frames of latency). So, a total of three 720p outputs and four 1080 outputs.

Individual layers were set up for each screen as well as options to use the 5 inside screens as one canvas at certain cues. IMAG input from the switcher was cropped in PVP for a portrait look for the center wall and a scaled landscape IMAG look that stretched over the whole 5 screen canvas. When running the IMAG feed i experimented a lot with effects sets or manually blending motion loops with IMAG. 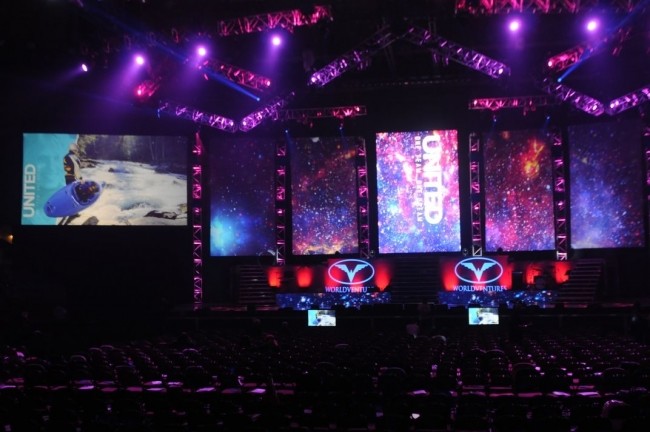