Acronyms in Production: What do they mean and when would I use them?

Getting started in a new field can be daunting as those who are “in the know” use acronyms that make perfect sense to them but are completely foreign to the layperson.  Live production is no exception. To help explain some of these standard protocols we have compiled a list of commonly used acronyms with a brief explanation and when you would use them in relation to typical production setups.

What is it? HDMI (High-Definition Multimedia Interface) is an audio/video interface for transmitting uncompressed, often encrypted (via HDCP*) video data, and compressed or uncompressed digital audio data to a computer monitor, video projector, video switcher, or digital television.

When Would I Use it? HDMI connections are great for sending audio and video over the same cable a relatively short (50 feet or less) distance.

What is It? SDI (Serial Digital Interface) is a family of video hardware interfaces used for transmission of uncompressed, unencrypted digital video signals.

When Would I Use it? SDI is best for long runs between your computer and your outputs. It is also the general interface on all professional video hardware (cameras, switchers, etc).

What is It? NDI (Network Device Interface) is a free protocol for Video over IP. It is designed to allow distribution of live video over existing IP infrastructure.

When Would I Use it?  Another great option to send video over long runs from your computer to your output.  It can also be used to tie multiple computers together which may be running different applications (ProPresenter, PVP) into a software or hardware switcher.

What is It? Syphon is an open source Mac OS X technology that allows applications to share frames – full frame rate video or stills – with one another in real-time.

When Would I Use it? Syphon can be used to share video feeds between applications on the same computer.

What is It? DMX(Digital Multiplex) is a standard for digital communication networks that are commonly used to control stage lighting and effects.

What is It? MIDI (Musical Instrument Digital Interface) is a communications protocol that connects a wide variety of musical instruments, computers, and related audio devices for playback, editing and controlling various hardware.

When Would I Use it? MIDI commands can be added to ProPresenter presentations (via the MIDI Module on OS X) to trigger external devices like lighting consoles and music hardware (keyboards, guitar pedals, etc).  MIDI can also be received by ProPresenter from other devices to automate slideshows and perform various tasks.

What is it? AES (an acronym for the Audio Engineering Society who helped develop it) is a standard for the exchange of digital audio signals between professional audio devices.

When Would I Use it? In most cases, AES connections (or AES50) will be used to connect your main mixing console to your monitor console or digital snakes.  These connectors resemble CAT5 network cables but are built slightly different and tend to be more robust (though a standard CAT5 or CAT6 cable may work in a pinch).

What is it? dB refers to Decibels, which is a unit of measurement to determine SPL (Sound Pressure Level) or loudness.

When Would I Use it? When mixing live sound,  you want to keep your overall levels to a respectable amount.  Most houses of worship would float under 100dB.

What is it? SMPTE (named after the Society of Motion Picture and Television Engineers) is a set of cooperating standards to label individual frames of video or film with a timecode to provide a time reference for editing, synchronization and identification.

When Would I Use it? Timecode can be converted to synchronize audio, lighting, and video. For example, a band may fire a track in Ableton live that sends an audio SMPTE track out one of the audio outputs. This output can be sent to the lighting controller and ProPresenter or ProVideoPlayer to perfectly sync the band, lighting, and video playback.

*HDCP is a form of digital copy protection encryption found on various video transmission standards (DVI, Displayport, but most commonly HDMI) meant to stop content from being played on unauthorized devices. While created with the best of consumer intentions, HDCP often causes problems in live production environments and video distribution using HDCP-encrypted signals should be avoided whenever possible. 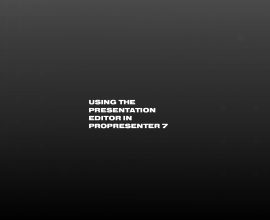 Using the Presentation Editor in ProPresenter 7 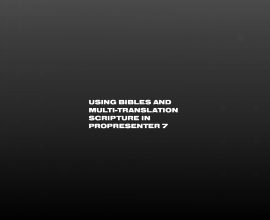 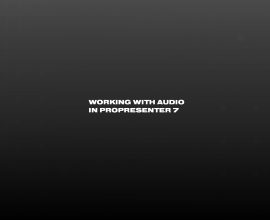 Working With Audio in ProPresenter 7 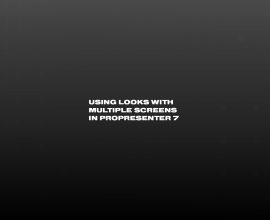