Alpharetta, GA, May 2, 2017 — At the 2017 NAB Show last week, Renewed Vision was presented with one of only four 2017 ACE (Awesome Cool Exhibits) Awards by the NAB Show. Renewed Vision took Best Linear Award, which recognizes the best creativity (use of color, sound, light and other creative elements), effectiveness (how well the booth draws in and engages the visitor), and overall structure (quality of the build and innovative use of materials) of booths from 100 to 399 square feet in size.

With more than 1700 exhibitors throughout three halls, the peer-driven ACE Awards recognize a very select few NAB Show Exhibitors for their innovations in booth design and execution. Renewed Vision’s exhibit, which demonstrated the functionality of their products, was powered entirely by its recently-announced PVP3 software. PVP3 magnificently mapped and processed all video in its 200-square foot space, drawing a seemingly never-ending stream of visitors to the in-line stand. The display, which consisted of a 10’x6’ 1.9mm LED video wall, was flanked by two columns of four 3.9mm LED panels set at an eye-catching angle for a more artistic display.

Video feeds from other Renewed Vision video production products (ProPresenter, ProVideoServer, and ProPresenter Scoreboard) were fed into PVP3 via SDI and NDI, and shown as high-resolution PIPs on the large video wall.

“To win this award among 1700 exhibitors is a testament to the power of our PVP3 software, which enables us to show off our products in an unusually dynamic way,” says Brad Weston, President of Renewed Vision. “It is an honor to win this award, and we are thrilled that our product development results have been recognized amongst such a large group of vendors.”

The 2017 NAB Show, one of the largest trade shows in the world, ran from April 24-27 and covered more than two million square feet of exhibit space. The company will show a similar exhibit at the upcoming InfoComm 2017 show in Orlando (June 12-14), which will serve as PVP3’s official AV industry event debut. More information on PVP3 can be found at PVP’s Product Page. 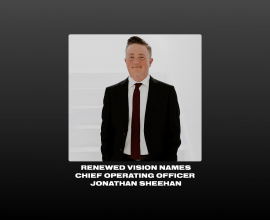