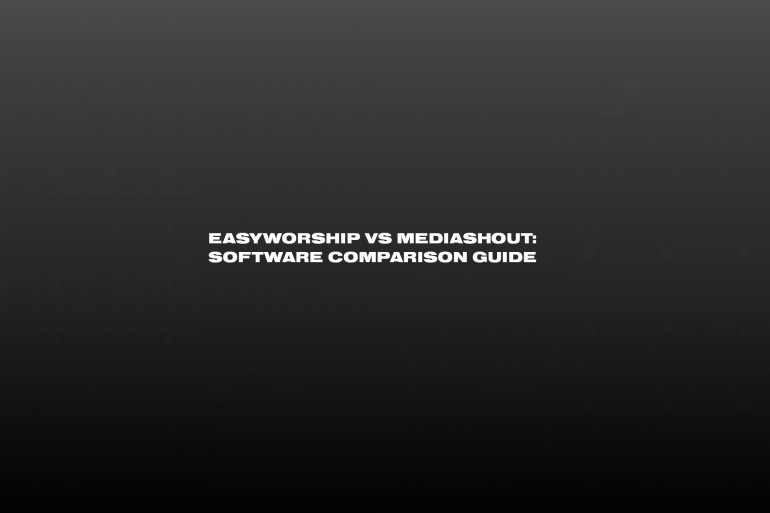 Churches and ministries looking for a more tailored approach to presentation software usually come across EasyWorship or MediaShout (or both) during their search. Both of these church presentation apps contain features and capabilities that make running visuals during a worship service much easier.

But the feature lists are long and you might not want to sit through 27 tutorial videos just to choose the right software for your church. To help you jump straight to the most important differentiators, we’ve put together this EasyWorship vs MediaShout comparison guide.

Just about everything you need to know about EasyWorship is right there in the name: it’s worship software designed to be easy, straightforward, and simple to use.

Just don’t mistake “easy” for “basic”: EasyWorship can do a lot more than free software or office-oriented solutions. The slide designer and presentation view are both well-built and customizable. In presentation mode, you can see live slides, preview what’s coming up, schedule events, and even pull in resources on the fly.

With a recent update, EasyWorship now supports up to three outputs, which is a big step up — especially now that so many churches are live-streaming.

Streaming integration and access to a wide range of content resources (though at a premium subscription price) add additional value here.

Compared to apps like PowerPoint and Canva, MediaShout can do more on a technical level.

However, the program looks quite dated by 2020s standards. The user interface was great in 2002 or so, but it hasn’t made much progress since. MediaShout has lost market share over the last decade or so, at least in part because of the clunky, outdated interface and missing quality-of-life features. That said, MediaShout recently released MediaShout 7, a good start to righting the ship.

Both EasyWorship and MediaShout are pretty limited here: both apps are Windows-only, which can be a pretty big obstacle for some ministries that use (or want to be able to use when needed) Macs in their AV setup. They also both support only one language natively: English. While that might not be an issue for many reading this review, it’s still a notable limitation.

Compare that to a worship presentation solution like ProPresenter 7, and the difference is pretty stark. ProPresenter 7 is a cross-platform (Windows and macOS) application, with support for 10 languages natively, including English, Spanish, Korean, Russian, and Chinese (simplified).

On the remote app front, MediaShout has an iOS remote app (…that doesn’t work with version 7, somehow) but no Android app. EasyWorship has a remote app for both iOS and Android with no significant compatibility issues.

Churches put a lot of effort into building slides every week, and both apps are built to support this well. The interfaces can both accomplish most of the same things, so you’ll be able to create visually rich slides that incorporate audio and video. While both apps deliver better slide capabilities than standard presentation apps, you’ll encounter a few limitations or missing features, like data-driven or linked text boxes or rulers and guides in the slide designer.

The best way to see the differences in interface and capabilities here is to check out each brand’s sample imagery. What they put forward as their best work says plenty about what you’ll achieve with their products.

Multiple or alternate views are vitally important for many ministries. A single presentation feed (and maybe a static presenter view a la PowerPoint) can display song lyrics, Bible passages, and sermon points in the sanctuary, but it can’t do anything further. You might want to do more, such as:

The latest version of EasyWorship adds better support here, giving you three schedule layout options and three output options to match. Three is it, though: the system isn’t as flexible or robust as ProPresenter’s, but it’s a step in the right direction.

MediaShout 7 has a customizable Stage Display, giving you a maximum of two outputs in a single file. Better than Google Slides, but weaker than EasyWorship (and hardly comparable to ProPresenter).

EasyWorship can integrate well with a live stream or broadcast configuration. It includes wireless NDI support and multicamera support, but it can also work in simpler setups (you can even use your smartphone camera). Support for sending alpha channel out to a video mixer is helpful in some setups, too.

However, note one big limitation: neither app can actually intake or display live video. The best they can do is feed their presentation content out to a separate video mixer like an ATEM Mini Pro, meaning you’ll be stitching together your livestream content elsewhere.

If you’re thinking “it sure would be nice if I could do all of that in one place,” then we should talk— ProPresenter does exactly that.

Both apps can quickly import scripture passages from popular Bible translations (though, oddly, MediaShout’s single seat license is limited to public domain translations like the KJV). They can integrate with CCLI SongSelect for easy and accurate song lyric importing. And they can pull in content from various media libraries, including premium media sources if you choose the premium package (or are subscribed to those separately).

Other than the single-seat version of MediaShout 7, the two applications are roughly equal here.

MediaShout offers several products, pricing tiers, and packages. The core MediaShout 7 presentation software can be purchased outright for $399 for a single PC, and a site license (unlimited computers) is just $100 more. There’s also a subscription version, MediaShout LE, which starts at $29 per month per computer ($179/year).

EasyWorship offers campus licenses rather than single seats: $15/month or $180/year gets the core EasyWorship experience, while $280/year adds in premium media and a few other premium features, like a color palette and an online media designer.

The truth is, EasyWorship vs MediaShout isn’t the right debate. The two apps are similar and fairly competitive with one another, but they both fall short in several key ways.

The real question is ProPresenter vs MediaShout vs EasyWorship.

On virtually every point discussed today, ProPresenter stands head and shoulders above both MediaShout and EasyWorship when it comes to church presentation software. With ProPresenter 7, you get:

Ready to see for yourself? Start your two-week free trial today.

If you’re looking for more detailed answers to the ProPresenter vs MediaShout vs EasyWorship discussion, you might enjoy reading these two guides to see how ProPresenter stacks up against each app: 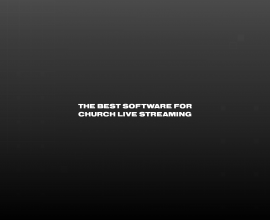 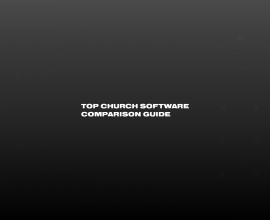 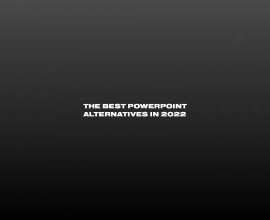 The Best PowerPoint Alternatives in 2023 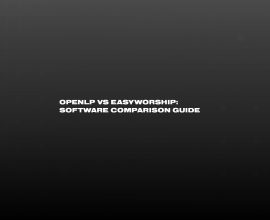