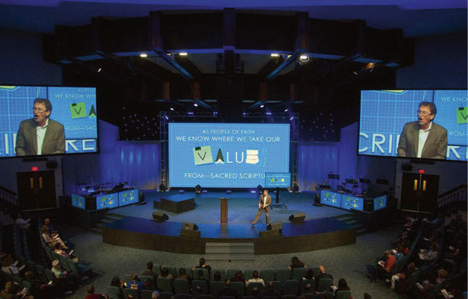 In San Jose, California, the Cathedral of Faith has been providing powerful and encouraging worship services for its congregation since its inception in 1965. Believing in the power of multimedia arts to help convey their message, the technical team behind those services were asked to create the ideal worship environment each week. Knowing that they needed to renovate their production design with LED video to maintain a high level of creativity and performance, the church recently worked with Nashville-based PixelFLEX and installed a new FLEXTour 3.9mm LED video system.

“I initially looked at LED video technology about 8-10 years ago, but at that time it was too cost-prohibitive so we ended up installing and LCD TV wall for our worship design,” began Kurt Foreman, Director of Operations, Cathedral of Faith.

“It worked well, but it had its limitations, and we couldn’t send a live video feed to it. As LED video has now become more cost-effective, we started looking at manufacturers that could meet the challenge of our HD cameras for the live IMAG video feed, and that’s when we discovered the FLEXTour system from PixelFLEX.” FLEXTour is a robust, high-definition and curve-able LED video display designed specifically for the high demands of live entertainment production. With its unique rigging capabilities that allow for traditional and off-set configurations, each 500mm x 1,000mm tile is fully front-serviceable and its integrated climbing ladder allows for quick access to displays flown high overhead. Built with the highest standard in components including the new NovaStar A8s receiving card, FLEXTour is completely flicker-free making it one of the premier LED video design solutions available today.

“We saw that other churches have been using PixelFLEX technology in their worship designs, and they were actually the last manufacturer we looked at during our search for the right technology,” continued Kurt. “Although they assured us their video screens would look great with our HD camera’s, when we saw their demo it was more than we could ever had dreamed, and the impact that it now has on our worship environment is amazing.” Ready to move forward with PixelFLEX, Kurt knew the technical specifications and performance capabilities of the FLEXTour LED would be exactly what they needed, but he was a bit surprised at how easily it integrated into their existing system.

“Our FLEXTour LED video system is about 13ft high and 26ft wide in a 16:9 ratio, and we knew we wanted to be in the 3-4mm pixel range because we wanted an impressive finished design,” explained Kurt. “It was interesting, given the different manufacturers that came in, that the PixelFLEX system was the only true plug-and-play solution. It really didn’t take any time at all to get the FLEXTour LED video fully integrated it into our production environment.” With the LED video system now ready to join the congregation, Foreman was excited to see how it would meet the challenge of the live HD camera feeds. Having already had a demo of the FLEXTour LED, he was confident they had made the right choice, and its performance certainly did not disappoint.

“We are currently using the FLEXTour as one massive wall directly centerstage in our worship design and it has exceeded everyone’s expectations,” added Kurt. “For playback, we are using ProPresenter and ProVideoPlayer, and for our live shots we have an HD 4A switcher with six Hitachi HD cameras. With the PixelFLEX system there is no moraying, and it looks great due to its high refresh rate. It’s one thing to see a demo of the product, but when you get the full LED wall in your space, it’s amazing. The FLEXTour system really looks phenomenal.”