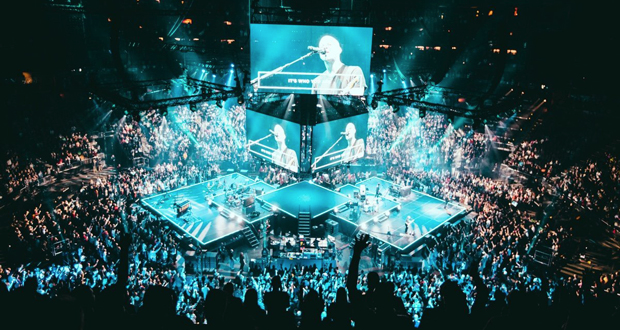 Professional production covers a multitude of solutions and experiences, from relaying a town hall speech from the boardroom to creating a state-of-the art museum exhibit or the mother of all parties. Ultimately, though, it’s about bringing visions to life, and AV is at its heart.

With live events, it makes a big difference whether you are streaming content to remote viewers or enhancing the experience for the audience who are actually there. “If the sources (cameras) are co-located and in the same field of view as the destinations (TV screens, projectors or LED jumbotrons), the experience could require very low latency throughout the entire AV pipeline, otherwise viewers may feel discomfort noticing the time-shift between what’s actually happening and the ‘reproduction’ of this on the screens,” says Samuel Recine, director of sales at Matrox Graphics.

Low latency standards conversion is a key technology for live producers, says Luke Marler-Hausen, AV and live business development manager at Blackmagic Design. “You have to manage signals going out to big screens at the side of the stage, LED cubes in stadiums, monitors in VIP, corporate and backstage areas, and even live streaming platforms, all of which may require slightly different formats.”

Realtime content is gaining ground against more traditional, pre-recorded video playback, says Sevan Dalkian, cto of RealMotion. “Today you can create impressive experiences that are developed 100 per cent in realtime. The obvious advantage is quick iteration and the ability to adjust the content dynamically using sensors or live database feeds. A lot of these technologies come from the field of video games, but new applications are developed every day.”

Subjective preferences and the ‘feel’ of the finished production can make a surprisingly big difference. You could provide a single solution for a certain setup to every client, but this doesn’t address concerns such as design, usability and how the technology will set the client apart from the competition.

“While one solution may be LED, another client may feel its brand doesn’t gel with less subtle LED panels so it may opt for a projector which can blend more into the environment, or a series of abstract monitors. Both will provide the same outcome but they can evoke completely different feelings and feel.

According to Recine, AV production environments usually consist of video and audio sources (cameras, microphones, PCs) which are routed at maximum quality to destinations. Routing implies cabling and switching so that the sources can be used anywhere they are needed, with encoders to process and compress the video stream.

“Commoditised technology from broadcast television like ‘channel-in-a-box’ and mini-private studio type products have been available for a long time. The level of realtime effects that can be performed on live video/audio has cost-effectively reached even the smallest of AV events.”

Brad Weston, a partner at Renewed Vision, advises buyers to do as much as they can in software. “Software is always going to be less expensive than hardware. By utilising high-quality, off-the-shelf components with good software to drive them you can create a custom solution that functions well, without the price of custom hardware.”

Display technology advances are extending the range of what can be achieved. From a video standpoint,  LED tiles’ flexibility makes it extremely cost-effective to create visual experiences that are far beyond the 16×9 screens people use every day, both in terms of size and the ability to mix and match tiles to create a unique multi-screen experience.

As stage designs become more complex it is important that any projection used remains bright, clear and vivid against the rest of the lighting, says Lucy Meredith, UK marketing manager for visual systems at Panasonic.

“There’s been a big transition to laser technology among rental companies. This offers greater levels of brightness and eliminates hot back-ups as the redundancy is built-in, so when it comes to assembling the AV on stage fewer physical projectors need to be installed. The reduced maintenance commitments of laser are a winning factor, with no lamp or laser replacements and a far more consistent brightness level and colour performance over time.”

Behind the scenes, encoder/decoder technology has become a major ingredient, according to Recine. “This pair can handle the capture of video and audio, transmission over category or fibre cable at low bit rates, switching over standard IP switches, video processing, decoding of the video/audio, and video display and sound playback – all with extremely low latency.”

Network protocols are also really shaking up both audio and video distribution. The advent of technologies such as Dante for audio and NDI for video is making high quality audio/video distribution far less expensive than ever before. However, although the right technology is an important success factor, buyers should never lose sight of the fact that first and foremost they are creating an experience, not a system.

“Connecting with your audience is key, because if you don’t you’ve failed,” says Dalkian. “Competition in compelling digital experiences has increased so it’s important to be able to differentiate yourself by your creative ideas rather than technology. It’s a balancing act between the two, hence the importance of using adapted technologies that allow you to achieve the desired impact.

To do this you need not only the latest content ingestion and delivery system but also the ability to effectively engage through either generative or interactive content of some sort. You need solutions that can withstand the technical requirements for large-scale projects with high pixel density displays and arbitrary shapes with 24/7 constraints, but you also need to allow designers or content production agencies to be empowered by the technology. “Often we notice technologies haven’t evolved and are still video playback focused, when today realtime is key, allowing quick iteration and dynamic content,” says Dalkian.

Don’t let the accountants run the show. While cost is an important factor you shouldn’t expect a ‘moon on a stick’ as cheaply as possible, and cost shouldn’t be your main aim.

And don’t abdicate responsibility. “Pro production systems come in many grades and quality levels,” says Recine. “So work with people you trust and do your own research. Don’t count exclusively on manufacturers, channels or even editorials to tell you what to buy.

“Always describe in detail the experience you want for the end-user rather than diving into the production itself,” says Weston. “Often we lose sight of the forest for the trees and it’s critical to give a ‘big picture’ overview of your project ideals before getting into the weeds of the technical requirements.”

“We often see projects where architects and AV have specified display and content delivery systems at the expense of strategy and concept,” agrees Dalkian. “Technology providers and creative agencies are then ‘stuck’ with a situation that will negatively impact the design and the impact it will have.”

Flexibility is a key requirement for today’s pro AV production teams because many companies now have to cater for such a variety of events, says Marler-Hausen. “Having a robust, multipurpose hub of live production kit means a live producer can scale activities up and down according to requirements, or quickly adjust to last minute production requests from a client.”

Modularity and expansibility are also important, says Westerlundh. “Too many times I’ve seen companies get a certain system for their current needs and a year later they have to re-invest in other equipment as the first unit did not have the ability to expand or upgrade.”

Buyers may wonder how much AV production they can realistically do in-house and when to call in outside help. The answer is that it depends. “This market used to be very niche and expert driven, where even very simple execution would cost a fortune and require highly technical staff,” says Dalkian. “Things have changed quickly in the last few years, lowering the barrier of such professional-looking executions.

“However, while it’s tempting to try to do everything in-house we think the best approach is to hire professionals who will be there to support your vision with their expertise. Organisations can certainly try to grow those skill sets internally, and some do. But it depends on how often they’ll rely on these resources to justify the investment. There’s also the advantage of being able to pick from a variety of suppliers, which becomes especially important when considering creative projects.”

“But many end-users run their own productions where they use basic tools to capture, record, stream and realtime manage AV events such as executive addresses and training. It depends on the nature of the event, available budget, technical difficulty, and sensitivity to things going wrong.”

If you are hiring an external production company it pays to do your research. Always hire those that have pulled off similar projects before. And make sure for one-off events that you know what equipment is being provided by the supplier directly and what is being cross-rented. Also make sure you have complete, written documentation of what is to be accomplished (in a single document, not an email chain).

One good thing is that, in a small pool, it’s easy to spot who the big fish are. “Pro production is visible and niche, so it’s not difficult to find out what suppliers have worked on,” says Marc Webber, co-founder of ER Production.

When rapper Drake toured Europe this year a centrepiece of the show was a 45ft projection-mapped sphere depicting “the death of the sun”, with images provided by eight Panasonic PT-RZ31K 30,000 lumen laser projectors arranged in four double stacks.

“The guys use d3 and Blacktrax to map and track the ball as it’s inflated during the show, so we can realign and hit it completely,” says lighting director and designer, Guy Pavelo.

A nine-camera set-up included large format cameras located across the stadium plus two Blackmagic Micro Studio Camera 4Ks in difficult to reach areas of the stage.

VPS devised two state of the art portable production units, each including an ATEM 2 M/E Production Studio 4K switcher, a Smart Videohub 40×40 router for signal distribution throughout the venue, and MultiView 4s for viewing four cameras simultaneously on a SmartView 4K preview monitor.

Published on these websites